Begin your hunt for those crafty corvids. Exit the Raven's Knock and take a look around. A lone raven sits right outside (270,335). Go to it. The raven will fly off as soon as you do so.

You have 60 seconds to follow the raven once it departs. Run after the raven in the direction it flew to (290,380) at a stop sign.

Approaching the ravens will again cause them to fly away. Follow the birds within 60 seconds until you reach a playground full of a flock (250,420). Approach the flock.

The ravens swiftly coalesce into a revenant when approached. Defeat the beastly bird.

Pluck the feather from the ground within 60 seconds where the revenant had been defeated.

Look farther out for the ravens, which are now gathered in greater number just past the playground (230,460).

Within 60 seconds, chase the growing unkindness to the middle of the rocky Fletcher road, where they once more await (235,555).

The revenant reappears, ready to strike. Defeat it.

Once the revenant has been defeated again, it drops another feather to pluck within 60 seconds.

With the revenant retreating, its ravens need to be found. Waiting just down Priest Heights is an even greater number of the birds (280,555).

Not willing to be caught, the ravens fly off and once more give 60 seconds to be found. They sit farther down the road (320,525).

The revenant will not rest. Defeat it.

Pick up one more feather from the fiend.

Look for more ravens nearby to chase. They have begun to congregate near the crossroads of Kingsmouth Road (395,500).

Objective: Find a way to call the revenant

By the stagnant fountain is a corpse clutching a mysterious note. Read the note. 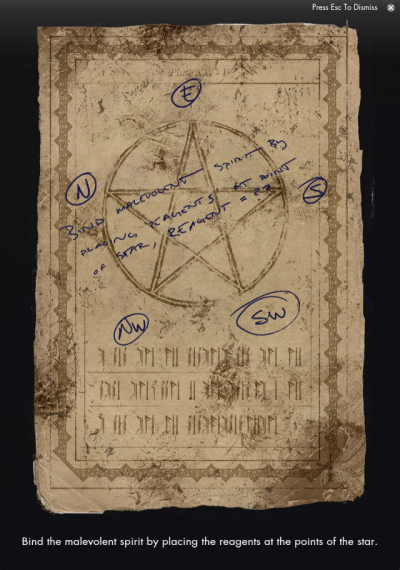 Follow the instructions on the mysterious note to summon the revenant.

To do so, place feathers on the fountain at each of the directions indicated by the note. Be sure to do so correctly by placing feathers at the following orientations: North (473,462), East (480,454), and South (474,445). Placed feathers may despawn if the ritual is not completed after a while.

Placing the final feather will bring forth the revenant to destroy. Kill the bad bird once and for all.

Comments
More Comments
Are you enjoying our guides?