The Strange Boat House in the Mist

Pass through the Innsmouth Academy school grounds and cross the Miskatonic River to reach the strange boat house (120,280). If reaching the boat house through the Viking's Run bridge, a large scarecrow named Biggman's Model will attack once on the other side.

Once inside the boat house, examine the mutilated corpse in the middle (115,255). Be aware that while it can be interacted with, it will not highlight even if the option to highlight interactables is enabled.

Doing so will cause the corpse to attack.

Objective: Search the corpse for clues

Destroy the mutilated corpse and pick up the Innsmouth Academy ID left behind where it once stood. 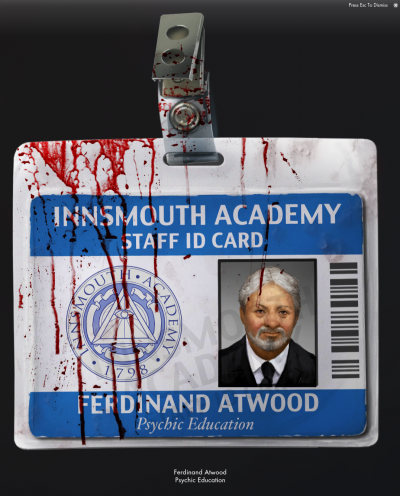 Objective: Search for a missing boat

Follow the river south and cross its water to a burning boat by a pier (COORDS).

4 Risen Academy Staff members are on the pier, shambling about as undead are wont to do. Kill them all.

Recover each Innsmouth Academy ID from the destroyed undead.

Approach the boat and its flock of feathered fiends to investigate the strewn corpses and body parts surrounding it. Once close enough, the ravens coalesce to form a Revenant Sadist.

Go to the opposite side of the river, where a boat can be seen crashed against the pier (145,90).

The fifth mangled corpse sits propped against the boat (143,89).

The impaled corpse is out to sea, impaled upon the side of a buoy east of Solomon's End (220,40).

Interacting with it to acquire its ID card causes a Svell Berserker to appear and attack from behind.

Objective: Leave the IDs in the administration office in the Academy

Return to Innsmouth Academy and leave the ID cards on the table by Carter and Ms. Usher (305,375).

Comments
More Comments
Are you enjoying our guides?